Playstation 4, Xbox One and Microsoft Windows

NYR
A Way Out is a prison-break action game created and developed by Josef Fares, the creator behind Brothers: A Tale of Two Sons. Josef recently founded Hazelight, a game studio that will be completing development in collaboration with Electronic Arts. A Way Out was released on March 23rd, 2018.

The game was designed intentionally for two players to play side by side locally but can also be played in online co-op. Players will control either Vincent or Leo, and guide them through their side of the story. The game will play in split-screen in either mode and players will retain control of their characters, even if the other is in a cutscene.

A Way Out is a story about two men in prison. Leo, who has been there a while, and Vincent, who is just arriving. Both men vie to break out, each for their own reasons. Leo already has a plan in mind and Vincent wants in on it. The players will have to figure out how to work together to not only break out of prison, but determine and carry out their goals once they are free. The are multiple choices throughout the game that can not only affect the gameplay and decisions of the other player, but determine how the story will continue.

Add a photo to this gallery 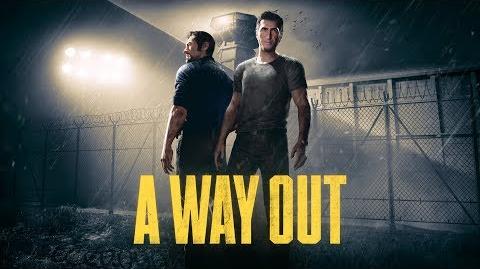 A Way Out Official Reveal Trailer 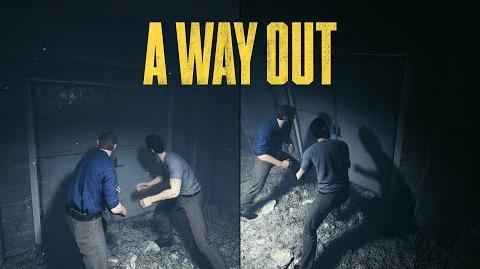 Retrieved from "https://awayout.fandom.com/wiki/A_Way_Out?oldid=548"
Community content is available under CC-BY-SA unless otherwise noted.